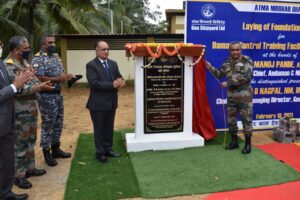 GSL signed the contract with Indian Navy for setting-up of DCS on 07 Aug 2020. With the signing of this contract, GSL has consolidated its position in supply of ship Simulators for Damage Control. As on date, GSL has built 06 simulators of various types for Defence Forces, which also includes export of one simulator to a neighboring country.

The DCS is essentially a training system that simulates a realistic and stressful but controlled environment for crew training in ship damage control and repair in various damage scenarios. In real-life operational service, there is the possibility of ship damage in times of both war and peace. To contain the damage and save the vessel, the crew needs to be able to respond to the threat with efficiency, expertise and confidence gained from training in similar situations. The DCS contributes invaluably in inculcating the ability to “think on their feet” amongst the trainees besides improving their team building skills, thereby preparing them for the unforeseen hardships and emergencies that may emerge at sea.

In the Shipbuilding domain, GSL is currently executing the prestigious Advance Missile Frigate Project for which the construction has commenced and will also be completing the ongoing 5 Coast Guard OPV project this year of which 2 vessels have been delivered to Coast Guard. The Missile Frigate Project is an Import Substitution project that will substantially boost indigenization and promote large number of shipbuilding MSMEs in and around Goa as well as in the country.Recently, GSL  has ventured into a new line of business for construction of Pollution Control Vessels for the Indian Coast Guard. GSL is expanding extensively into commercial shipbuilding, inland waterways and composites, executing projects for Uttar Pradesh Tourism, Lakshadweep Administration and Assam Government. GSL has also signed a contract with Indian Army for construction of 12 Advanced Fast Interceptor Crafts specifically being designed for operations at high altitude areas.