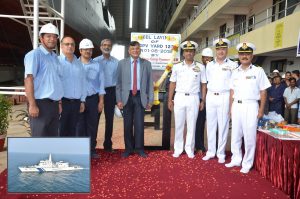 The Flag Officer is a highly decorated officer having commanded the 1241 RE corvette, INS Nashak, the missile corvette INS Kirpan and the Guided Missile Frigate INS Brahmaputra, besides doing a tenure as Executive Officer of the Guided Missile Destroyer INS Delhi. A rotary wing pilot qualified on Sea King 42 B / C and Alouette helicopters, he has served in critical aviation billets in the Indian Navy. During his first visit to Shipyard as FOGA, he was highly appreciative of the efforts of GSL in indigenous shipbuilding for the Indian Navy and Coast Guard.

The 05 CG OPV project is a follow-on of 06 CG OPV Project, completed in 2017. With focused efforts towards ‘Make In India’, the indigenous content has been increased from 60%, for 06 CG OPV Project, to 70% for the ongoing 05 CG OPV Project. It is noteworthy that the contract for 5 CGOPVs was signed by GSL with MoD on 26th Aug 2016 and commencement of production of first vessel was formally started within 3 months with formal steel cutting on 13th November 2016, at the hands of Hon’ble Prime Minister of India Shri Narendra Modi. These Vessels are scheduled to be delivered between Jan 2020 to Jun 2021.

These vessels for the Indian Coast Guard are based on in-house design of GSL and will be fitted with most modern and technologically advanced machinery and computerized controls systems, making them the most advanced Patrol Vessels in service with the Indian Coast Guard on delivery. These 2400 tonnes vessels will be equipped with additional features like Quick Response Boats for rescue and anti piracy, Gunnery simulators and many more advanced features.  The hull would be the most efficient form designed by GSL and would provide for fuel efficiency, crew comfort and excellent sea keeping qualities. The Shipyard also aims to bring down the reduced build period for OPVs for ongoing 05 CG OPV Project to 30 months against 36 months taken for 06 CG OPV Project. Towards that GSL has made good progress with 1st and 2nd ships achieving 44% and 37% completion. The 3rd ship for which the keel was laid today, has already achieved 25% completion.