The 2nd Vessel of the indigenous Project for 05 Offshore Patrol Vessels for Indian Coast Guard was ceremoniously launched on 25 May 2019 at Goa Shipyard Limited. Mrs Seema Mittal, wife of Controller General of Defence Accounts (CGDA) Shri Sanjiv Mittal performed the launching rituals and named the vessel as ‘Sujeet’. The first vessel of ship class was launched three months earlier by the Hon’ble Raksha Mantri on 21 Feb 2019. 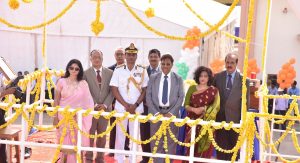 The ongoing shipbuilding project for 05 Offshore Patrol Vessels is one of the biggest orders being executed by GSL for the Indian Coast Guard. This indigenous Project was launched by the Hon’ble Prime Minister on 13 Nov 2016. It is creditable for the shipyard to complete the 100% hull construction and bring the vessel in advanced stage of outfitting for delivery in Jun 2020. Entirely designed in-house by the professionals of GSL, these OPVs will form a formidable part of the Coast Guard Fleet and used for protection of Exclusive Economic Zone of territorial water. These vessels will be fitted with most modern and technologically advanced machinery and computerized controls systems, making them the most advanced Patrol Vessels in service with the Indian Coast Guard. These 2400 tonne vessels will be equipped with features like Quick Response Boats for rescue and anti piracy, Gunnery simulators and many more advanced features. The hull would be the most efficient form designed by GSL and would provide for fuel efficiency, crew comfort and excellent sea keeping qualities.

On this occasion, Cmde BB Nagpal, CMD GSL said “In line with the Shipyard’s tradition of delivering on time, we are confident to deliver the 2nd Vessel, launched today, as per the contractual schedule. Our endevour has been to maximise the indigenous content on these ships and I am happy to state that more than 70% indigenisation has been achieved for these ships.”

Skip to content
This Website is committed to ensuring digital accessibility for people with disabilitiesWe are continually improving the user experience for everyone, and applying the relevant accessibility standards.
Conformance status
Developed by
Webpage Last Updated on : May 28, 2019
Note: Content on this website is published and managed by Goa Shipyard Limited For any query
regarding this website, please contact the web information manager –
Name : Shri M. KALAIYARASAN
Designation : Additional General Manager (IT)
Address : Goa Shipyard Limited, Vasco Da Gama, Goa – 403802
Tel : 0832-2513562
E-Mail : mkalaiyarasan@goashipyard.com