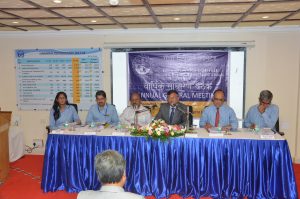 RAdm. Shekhar Mital highlighted the rich exhilarating performance, recorded year after year by the Company during last four years with compounded growth in revenues of over 28% in last 04 years. He highlighted the Company has managed to create new benchmarks and the ‘Build-Timelines’ have become a ‘new normal’ for the Industry. The Company, in the last four years has created an enduring culture of outperformance by delivering 26 ships, all ahead of schedule, amounting to 32,000 tonnes, (12,000 tonnes in FY 17-18 alone), which is the highest in the industry. These include 06 Coast Guard OPVs, 02 OPVs to Sri Lanka, 01 OPV to Indian Navy, 02 Fast Patrol Vessels & 11 Fast Interceptor Boats to Mauritius, 04 x 1000 Ton Fuel Barges to Indian Navy. Besides this, the Company has also delivered 01 Damage Control Simulator each to Myanmar and Indian Navy. Due to focus on execution and deliveries coupled with strategic alignment and refinement in policies, the Value of Production has surged ~3 times in last 4 years from Rs 509 Cr in FY 14 to Rs 1343 Cr in FY18. Compared to Rs (-) 63 Cr Profit Before Tax in FY 14, Company recorded Rs 331 Cr PBT in FY 18 (CAGR 83.87%). Similarly, Operating Profit has increased manifold from Rs (-) 29 Cr in FY 14 to Rs 252 Cr in FY 18 and has been the highest amongst all DPSU shipyards consecutively for last three years.

Elaborating upon the business outlook, RAdm Mital stated that the Company’s focus areas in the coming years would primarily be on timely completion of 05 CG OPV Project and NBC Training facility at INS Shivaji. The Company will also focus on early conclusion of contract for 02 Frigates for the Indian Navy and work in conjunction with MoD/ Navy for expeditious processing of MCMV Project. The Company is working hard to commence both projects by 2020.

Commenting on the annual results, CMD indicated that these results are direct offshoot of very benign industrial atmosphere, policy formulation and decision making at Govt / Ministry of Defence level. Further, GSL has been direct beneficiary of Raksha Mantri’s direct guidance and support.

The highlights of the declared financial results are as tabulated below:

Skip to content
This Website is committed to ensuring digital accessibility for people with disabilitiesWe are continually improving the user experience for everyone, and applying the relevant accessibility standards.
Conformance status
Developed by
Webpage Last Updated on : October 1, 2018
Note: Content on this website is published and managed by Goa Shipyard Limited For any query
regarding this website, please contact the web information manager –
Name : Shri M. KALAIYARASAN
Designation : Additional General Manager (IT)
Address : Goa Shipyard Limited, Vasco Da Gama, Goa – 403802
Tel : 0832-2513562
E-Mail : mkalaiyarasan@goashipyard.com