The 73rdanniversary of India’s Independence was celebrated at Goa Shipyard Ltd (GSL) with patriotic fervor. Cmde B B Nagpal, CMD unfurled the National flag at GSL campus, which was synchronized with the singing of National Anthem and Guard of honour by the CISF personnel. On the occasion, CMD greeted all members of GSL family and GSL CISF contingent.  The sacrifices made by our freedom fighters and brave soldiers were solemnly remembered during this occasion through rendition of Patriotic songs in Hindi, Konkani and Marathi which were presented by GSL’s Serenade Group. This was followed by patriotic plays and skit on Industrial Safety by students from Municipal School Vasco.The CISF Personnel presented a very impressive Weapon drill during the programme.

Addressing the gathering, Cmde Nagpal highlighted the stellar and consistent performance of GSL in the past years and re-iterated the need to maintain the same tempo. CMD brought out the need to make adaptive and proactive changes to keep pace with technology and to be able to effectively compete in the field of Shipbuilding so that the Yard constructs platforms within much reduced time period, with highest quality standards and improved safety conditions. He brought to light the challenges faced in terms of increased competition in the market and highlighted the need to further develop upon the inherent processes and methodologies so as to improve our products and further curtail delivery timelines. He also emphasized on need of adopting best safety practices in shipbuilding and urged all employees to keep safety consciousness as top priority while fulfilling their duties. GSL employees were awarded with special commendation and commendation certificates for outstanding performance in their respective areas of work, Best Turnout awards for CISF were also presented on the occasion, while meritorious students received scholarship awards from the Chief Guest and other dignitaries 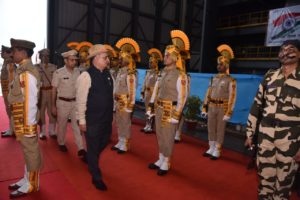 Skip to content
This Website is committed to ensuring digital accessibility for people with disabilitiesWe are continually improving the user experience for everyone, and applying the relevant accessibility standards.
Conformance status
Developed by
Developed and Maintained by : Solarman Engineering Project (P) Ltd.