The 55thAnnual General Meeting (AGM) of Goa Shipyard Limited was held on 29 Sep, 2021 through video conferencing, due to COVID-19 pandemic. The meeting was chaired by Cmde B. B. Nagpal, Chairman & Managing Director (CMD) and attended by other Directors, Auditors and the Shareholders. Audited Financial Statements for FY 2020-21 were adopted at the meeting. 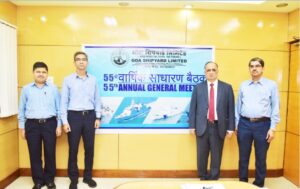 While addressing the members, CMD informed that in spite of COVID-19 pandemic, the Net worth of the Company has reached all time high to Rs 1,098 Cr. The Company achieved Gross Revenue of Rs 979 Cr and Value of Production of Rs 827 Cr in FY 2020-21. Profit Before Tax reported at Rs 172 Cr and Profit After Tax at Rs 128 Cr.

The Company delivered three vessels out of the five Offshore Patrol Vessel Project to the Indian Coast Guard till date with over 70% indigenous content and further consolidated its record of on-time deliveries. The fourth vessel is ready for delivery in all respects and expected to be delivered soon. Significant progress has been achieved in Frigate Project as keel of both the vessels have been laid. The Company has recently been awarded a contract for construction of two Pollution Control Vessels for the Indian Coast Guard and also secured an order for supply of twelve specialized boats for the Indian Army on competitive bidding. The Yard is also executing multiple orders of ship repairs and general engineering services.

CMD remarked that as on 31 Mar 2021, the Company has a healthy order book of Rs 14,120 Cr (approx), which provides clear visibility of growing revenue and profitability in coming years. Recently concluded contract valuing Rs 559 Cr for two PCVs has further strengthened the order book position.

GSL has been proactively implementing various Govt. initiatives such as ‘Make in India’, ‘Atmanirbhar Bharat’, ‘Skill India’, ‘Startup India’, ‘Swachh Bharat Abhiyaan’ etc. In order to enhance indigenization content, the Company has taken various measures which will promote and facilitate MSMEs and local vendors to participate in the Shipbuilding process. Continuing its past trend, the Company has spent much higher amount on CSR than the statutory prescribed, which indicates its strong commitment for social development of the community in and around Goa.

CMD expressed his sincere gratitude to the Ministry of Defence, Central and State Government Authorities and Indian Navy & Indian Coast Guard Authorities and all other valued customers for their unwavering support and valuable guidance. He also thanked all the shareholders and directors for their co-operation and acknowledged the unstinted support and unflinching commitments by all the employees of the Company during these uncertain times.