Shri Brajesh Kumar Upadhyay, CMD GSL briefed the DG, ICG on the progress of construction and design of these vessels which have been fully undertaken in-house by the GSL Design team. These vessels specially mandated for Pollution response and which have been designed for the first time in India will also have a significant indigenous content, a commendable feat considering the government’s push for Make in India and AtmaNirbhar Bharat Vision. This prestigious contract was bagged by GSL through competitive bidding which was participated both by public as well as private shipyards.

Physical construction of the vessels commenced with Steel Plate cutting ceremony which was held on 22 Feb 2022. Plate cutting was held at the hands of IG S Paramesh, COMCG (West), Mumbai.

The primary role of the Pollution Control Vessel is to carry out dedicated oil spill response operations in the vast EEZ of our country and also around the various neighboring Islandsand operation of one integral twin engine helicopter. Responding to Marine Pollution is a highly technical task requiring specialized and dedicated equipment and these vessels are fitted with state of the art Pollution Control and Response facilities.

The vessel which has been fully designed by GSL Design Team will have an overall length of 114.5 mtrs, Breadth of 16.5 mtrs and a draft of 4.5 mtrs and is capable of carrying a strength of 129 personnel onboard (14 Officers and 115 Sailors). Maximum speed of the vessel will be 22 Knots with an endurance of 6000 Nautical Miles. Vessel will be equipped with4 Sets of Ocean Boom, 5 sets of Near Shore Boom, 8 Skimmers, 05 Recovery Oil Stowage Portable Barges for Pollution control equipment. In keeping with the continuing tradition of on time deliveries by GSL, these vessels are also envisaged to be delivered as per contractual schedule.

Meanwhile on 21st November 2022, another significant feat was achieved by GSL with the Plate Cutting for 08 FPV Project which was held at the hands of IG DR Sharma, PTM, TM, DDG(M&M) at GSL. Contract for 08 Fast Patrol Vessels for Indian Coast guard was signed on 28 March 2022. These FPVs, specially designed by GSL for Coast Guard are medium range weapon fitted surface vessels capable of operation in Coastal waters and around island territories to protect offshore assets and island territories in and around Indian waters. Ship will be equipped with 2 Diesel Engines of approx. 2880 KW (IMO Tier II compliant type approved engine). The Plate Cutting Ceremony marks the physical construction of these vessels which are scheduled to be delivered by 2024 onwards. 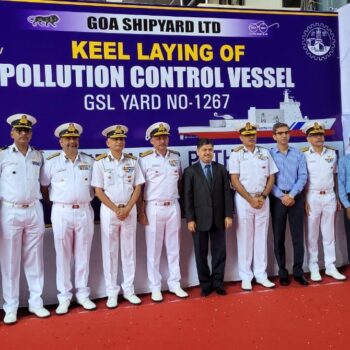 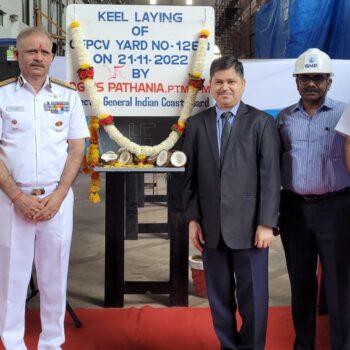 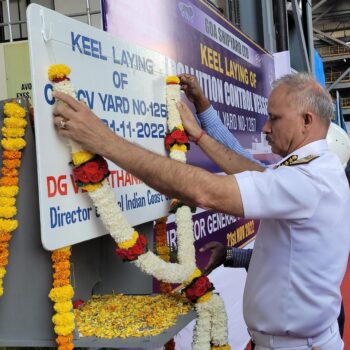 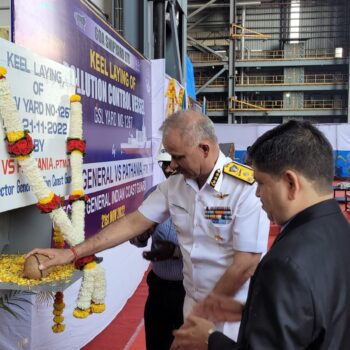