General Manoj Mukund Naravane PVSM, AVSM, SM, VSM Chief of the Army Staff visited Goa Shipyard Ltd on 07 Aug 2021 to review the various projects being executed by the Shipyard.  Apart from the various shipbuilding projects of the Yard, the COAS was briefed on the progress of the Fast Patrol Boat project that is being executed for the Army.

Indian Army signed a contract with GSL for construction of 12 Fast Patrol Boats under emergency procurement. These boats will be deployed for surveillance and patrol in water bodies including high altitude areas. The COAS was briefed on the construction methodology of these composite vessels at GSL’s state of the art GRP Facility.  The Army Chief was also briefed on the capabilities of the platform onboard the first prototype vessel that was recently launched.

An in-house designed Fast Interceptor Craft was also showcased to the COAS during a short sea sortie onboard the vessel. The COAS was conducted around the Shipyard during which CMD, Cmde BB Nagpal (Retd) apprised him of the various infrastructure modernization activities completed and which are in progress at GSL. 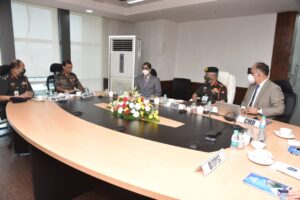 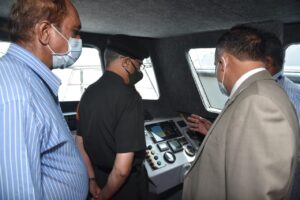