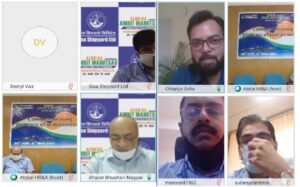 On 30.04.2021, Cmde B B Nagpal, CMD, GSL virtually flagged off the program focussing on India’s 75 year long journey as a nation and to recommit to achieve the goals set by our leadership. This series of webinars/digital exhibitions focused on Skill Development initiatives, Apprentice training and Quality improvement in Supply Chain. Senior Surveyors from classification societies like Indian Registrar of Shipping (IRS) & American Bureau of Shipping (ABS) highlighted various aspects of Quality requirements in defence shipbuilding to the vendors. Further, during the week, a virtual exhibition of equipment developed in-house by GSL Apprentices was also, organised and was widely appreciated.

On the last day of the program, a specialized program for on-boarding of Vendors on GeM portal was also organised, during which around 75 vendors were taken through live on-boarding exercise by GeM Facilitator for Goa-Karnataka region.

The Govt of India has launched Bharat ka Amrit Mahotsav, the countdown to India’s 75th year of Independence with programs to commemorate India’s achievement in last 75 years and the way ahead to become “Atmanirbhar Bharat”.