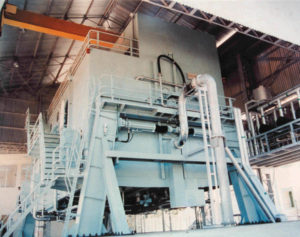 Goa Shipyard Ltd is proud to design and construct Damage Control Simulator (DCS) – ‘Akshat’ and ‘Avinash’ for the Indian Navy. These Damage Control Simulators are only two of its kind in Asia and are among the very few existing worldwide. DCS Akshat was commissioned at INS Shivaji, Lonavla, India on 18 December, 2001 and DCS Avinash was commissioned at INS Venduruthy, Kochi, India on 12 April, 2012. Since then, both the simulators have been successfully serving the training needs of the Indian Navy with zero down time. GSL is also building one DCS for the Govt.of Myanmar.

The DCS is essentially a training system that simulates a realistic and stressful but controlled environment for crew training in ship damage control and repair invarious damage scenarios. In real life operational service, the possibility of ship damage in both war and peace times is likely. To contain the damage and save the vessel, the crew needs to be able to respond to the threat with efficiency, expertise and confidence gained from training in similar situations. The realistic damage scenarios and crisis generated in the DCS contributes invaluably in driving away fear among the trainees and in improving team building traits, thereby preparing them for unforeseen hardships and emergencies at sea.

Skip to content
This Website is committed to ensuring digital accessibility for people with disabilitiesWe are continually improving the user experience for everyone, and applying the relevant accessibility standards.
Conformance status
Developed by
Developed and Maintained by : Solarman Engineering Project (P) Ltd.